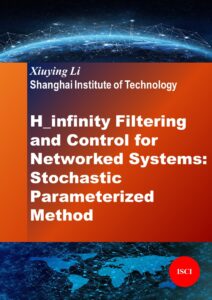 Networked Control System (NCS) refers to a class of spatially distributed closed-loop systems where the actuators, sensors and controllers are connected by communication networks. Compared with the traditional control system, NCS has the advantages of simple connection, easy expansion, convenient for maintenance and strong interaction, etc. It is widely applied in many fields of national economy, such as remote medical treatment, intelligent transportation, aerospace, national defense and so on. But due to the limited network bandwidths, there exists problems inevitable such as packet losses and varying delays etc. during the transmission of data packets. At the same time, the introduction of the networks increases the complexity of the systems such that the systems will suffer from nonlinear disturbances caused by the environment and the sensor saturations. Due to the random nature of data arrival, the whole control system is no longer a deterministic system, but a stochastic system. At present, the research on network-based stochastic system has become one of the international hot topics in the control field. In this book, we investigate the  filtering and control problems based on stochastic parameterized method for the NCS in the consideration of all kinds of uncertainties during the data transmission. By using Lyapunov stability theory and linear matrix inequality technique combining with stochastic analysis and robust control theory, the desired  filter or controller is designed such that the filtering error system or the closed-loop controlled system is stable in the mean square sense to some extent. Simulation results are also given to show the effectiveness of the proposed method.